Free delivery when you spend £5 or more
in Ideas 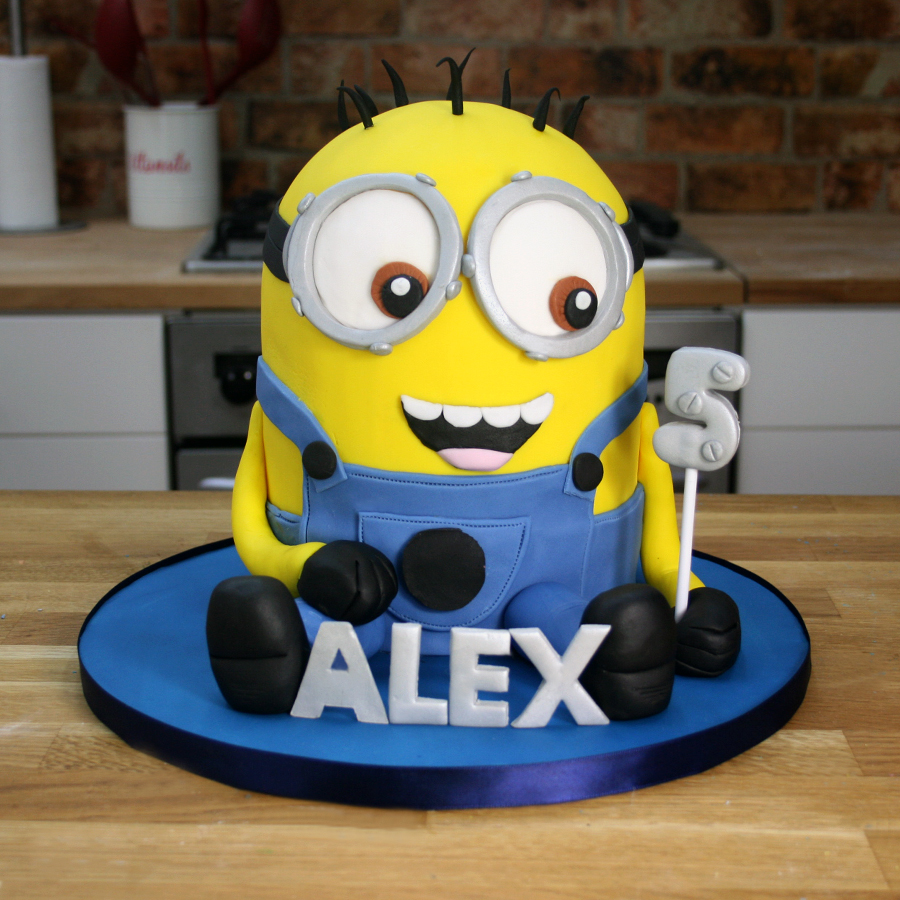 You could make this adorable 3D Minion cake by following our tutorial below as we give you a detailed step-by-step guide! This cute Minion would be perfect for any Despicable Me fan and can be customised to suit your purpose. The 3D Minion cake would be perfect for a child’s birthday party, and you can even make your own matching Minion cupcakes by following our cupcake tutorial! We also have an alternative Minion cake if you’d rather have a go at making your own characters, too. Either way, this 3D Minion cake would look rather impressive as a centre piece at your party, so why not give it a go today!

Before you start to decorate your Minion cake, you might want to cover the cake first. You’re going to need three cakes; two 6″ round cakes (these need to be quite deep) and one semi-circle cake. Once baked, then it’s just a case of sandwiching them together with buttercream or jam, covering the entire cake with a layer of buttercream and then rolling out and draping your yellow sugarpaste over this. You’ll need around 4 packs of yellow sugarpaste to cover this cake, but I’d use a little more – then you’ll have plenty to make the arms for your Minion, too! You also need a cake drum, and we recommend an 11″ drum for this particular cake.

1. OK, so hopefully you have successfully baked, butter-creamed and covered your Minion cake in yellow sugarpaste, but if you haven’t – now is the time to do it! Don’t worry too much if the edges of your cake are a little uneven or become marked, because you’re going to cover around 2″ from the base of the cake upwards in a strip of blue sugarpaste – so this part will be hidden!

2. Firstly, you’re going to need to roll out a large chunk of powder blue sugarpaste into a long strip, and then trim this using a cutting wheel so that it measures approximately 2″ in width. The length of your sugarpaste should measure roughly 25cm.

3. Next, carefully pick up the strip and gently wrap this around the base of your cake. This part can be a little tricky, so take your time. The strip will only go around half of the cake, and you need to make sure that the ends finish in the centre of the front of your cake. If you try to make a longer strip and wrap this around the entire circumference of the cake, you’ll find that it may rip when you pick it up (and it’ll be a lot more fiddly, too!)4. Repeat steps 2 and 3, ensuring the second strip goes around the other half of the cake. The ends should meet in the middle, as shown in image

4. Use a little edible glue to secure the strips to the cake.

5. The next step is to create the front part of your Minion’s uniform. To do this, cut out a large rectangle, measuring approximately 5″ wide by 3″ tall and around 3mm in thickness. Stick this to the front of your Minion, securing into place again using a little edible glue. Repeat this step for the back of the Minion.

6. Now you can make a little pocket for the uniform. An easy way to do this is to use a large circle cutter and then cut this in half. You can of course free-form the pocket by using a cutting wheel if you prefer. Glue this to the centre of the uniform (only on the front of your Minion).

7. To make the straps, firstly roll out some more powder blue sugarpaste to around 2mm thick. Using a cutting wheel, cut 2 long strips roughly half an inch wide. Check that the length of each strip will wrap from the front of the uniform to the back.

8. Again this part can be a little tricky, so just take a deep breath and take your time. Wet the back of the straps with a little edible glue, and then place the end of one strap to one corner of the uniform. Slowly drape the strap from the front to the back of the uniform, pressing the strap to the cake to secure into place. If this is a little confusing, see our tutorial photos for guidance. Repeat this step with the second strap. If there’s any excess sugarpaste, simply trim this off.

9. The hardest part of the cake is now done! Now it’s time to add the details to the uniform. Start by making the buttons out of black sugarpaste using a small and medium circle cutter to create these. Stick two small circles to the front of each strap, and one medium circle to the pocket.

10. Adding stitching to the uniform will really make the cake – it’s the fine details that bring it to life! Using the quilting tool and a steady hand, create the dashed lines along the edges of the uniform and pocket.

11. You can now sit the cake on top of your cake drum. Position the cake so that it is slightly off centre – you need to have extra room at the front so that the legs and arms don’t fall off the edge of the board!

12. Now that the body is complete, the fun can begin with the face! To make the goggles, firstly roll out some silver modelling paste to around 0.5cm thick, and use a large round cutter to make two circles.

13. Using a slightly smaller round cutter, cut out the centre of the circles to leave you with two rings. These will make the outer parts of the goggles. Roll several small balls of silver modelling paste and squash these with your fingertips. Use the blade modelling tool to create small indentations in each ball to create ‘screws’ for around the edges of the goggles, and stick into place using edible glue.

14. Next, use the medium round cutter to make two white circles from sugarpaste. Stick the white circles to the face of your Minion and then place the silver rings on top of these.

15. To finish the detail of the goggles, roll out some black sugarpaste to around 2mm thick and cut this into a long strip, roughly 1″ in width. Use the blade tool to make a slight indentation along the length of the strip. Glue the strip around the back of the Minion’s head, starting from one side of the goggle to the other.

16. Now it’s time to add some legs and feet to the Minion. Start by creating the legs, which can be made by rolling a chunk of powder blue sugarpaste into a thick sausage shape. Cut the sausage in half to make two legs.

17. For the feet, roll two equal sized balls of black sugarpaste into chunky oval shapes and use your fingers to smooth out the edges. Then, take the blade modelling tool and firmly press this into each foot across the centre. Lightly use the blade modelling tool on the heels to create three horizontal lines for the bottom of each shoe.18. Stick the shoes on the ends of each leg, and then position these in place on the cake drum.

19. For the arms, you firstly need to take a piece of yellow sugarpaste and roll this into a long sausage shape. A great way to gain a perfect sausage is to roll your sugarpaste using a cake smoother, rather than your hands. This will make one of the arms, so repeat this step to make the other!

20. The two hands are going to be made slightly differently, as one will be resting on the Minion’s knee, and the other will be holding a stick, as you’ll discover later. For the first hand, roll a piece of black sugarpaste into a ball and then shape this into a rounded tear drop shape. Use the blade modelling tool to create several slits in the hand for where the fingers should be.

21. Add the arms to the Minion by pressing one end of the sausage to the side of the Minion, just below the uniform strap. Gently bend the arm into place so that it is resting on the leg. You will probably need to use a little edible glue to hold this in place, as the weight of the sugarpaste will otherwise make it break or droop. The other arm can simply rest on the cake drum, but again you’ll need to use a little edible glue to keep it in place.

22. The second hand is made by again, rolling a piece of black sugarpaste into a ball, and then mould this, using your hands, into a bent sausage shape. The hand should appear as though it is curving round. Use the blade modelling tool to again create several slits along the side of the hand.

23. To make the hand appear as though it clenched, take a small piece of black sugarpaste and mould this, as with the hand, into a bend sausage shape – but this time, make it bend in the opposite direction to the hand. This will make the thumb. Stick the thumb to the hand as shown.

And that’s the end of part 1! Part 2 will show you how to make a number topper, finish off the eyes, make the mouth and hair and create the letters for the name.