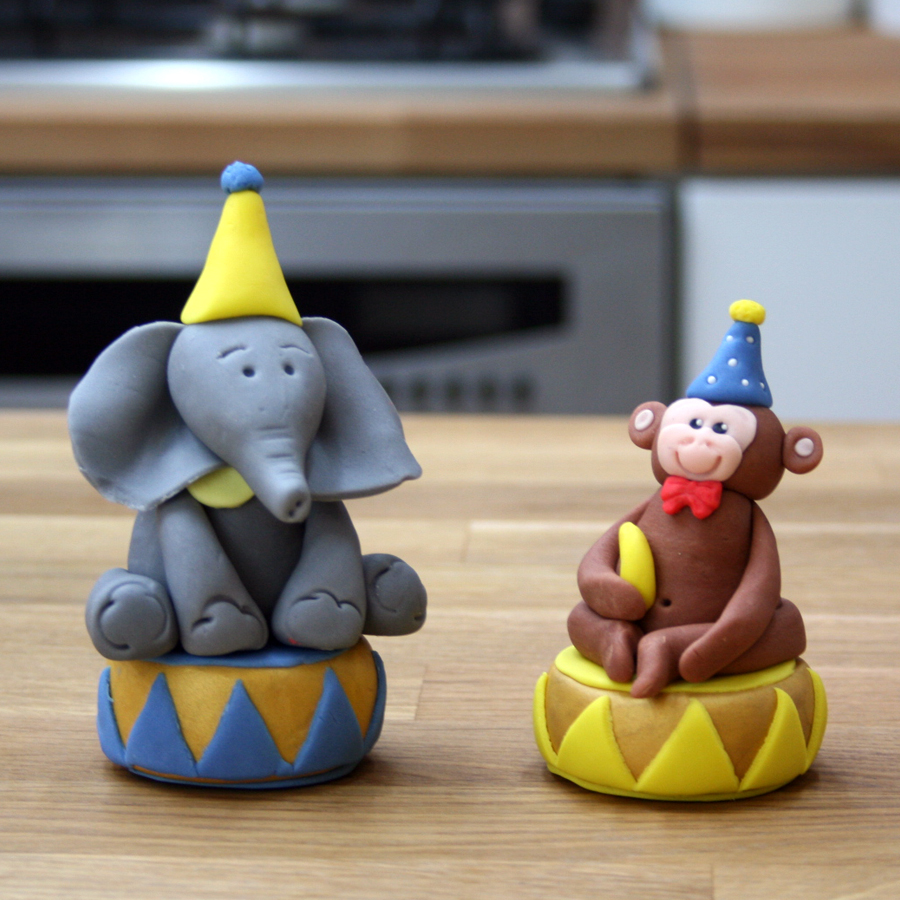 Quit monkeying around and get stuck into this circus tutorial! We’re going to show you how to make your very own elephant and monkey circus-themed cake toppers so that you can make an adorable celebration cake for a child’s birthday or other special occasion. The toppers are fun with lots of bright colours, which is sure to put a big smile on your child’s face! We’ve also made a seal & lion topper tutorial so you can make as many toppers as you like to adorn your beautiful cakes with! To find out how to make the drums for your animals to sit on, see our seal & lion tutorial – it’s all in there!

1. Start by taking a piece of grey sugarpaste, roughly the size of a golf ball and mould this into a cone shape with a flat top.

2. For the legs, roll two pieces of grey sugarpaste into elongated cone shapes and stick these to the sides of the elephant. If you need to, secure into place with a little edible glue.

4. Add detail to the legs by making elephant toes! Use the scallop modelling tool to make several curved lines in the bottom of each foot.

5. For the head, you’ll need to take a piece of sugarpaste a little larger than the size of a grape, and roll this into a smooth ball. Put to one side for now.

6. Place a cocktail stick through the centre of the elephant, leaving a small part of the stick exposed at the top. Roll out a piece of pastel yellow sugarpaste to roughly 2mm thick and use the medium PME flower cutter to make a frilled collar for the elephant. Thread this onto the cocktail stick.

7. Take the head and, using your finger, carefully roll one end of this to make a sausage shape (this will form the trunk).

8. Roll out another piece of grey sugarpaste to roughly 1mm thick and cut out two circle shapes using the PME round cutter set. These circles will make the ears of your elephant.

9. This part can be a little tricky, so take your time. Wrap each ear around the back of the elephant’s head, and then place this on top of the body. Use a little edible glue to secure everything into place. Carefully bend and position the ears how you want them to appear.

11. To make the eyes, use the cone modelling tool to make two small holes in the head. Fill these with two small pieces of black sugarpaste.

12. For the party hat, firstly take a piece of yellow modelling paste and roll this into a cone shape. Take a small pea-sized piece of powder blue sugarpaste and roll this into a ball. Use the cone modelling tool to make lots of little holes in the ball to give it a fluffy effect. Place the hat on top of the elephant’s head, securing into place using a little edible glue. Stick the blue ball on top of the hat.

13. Dab a little edible glue on top of the circus drum and then sit the elephant on top of this. You can see how to make the drum on our seal & lion circus toppers tutorial!

14. This time you want to take a piece of teddy bear brown modelling paste, a little smaller than a golf ball, and again roll this into a cone shape with a flat top.

15. To make the legs, roll two pieces of brown modelling paste into long sausage shapes, and then bend the ends to make the feet. Wrap the legs around the sides of the monkey so that the feet meet at the front.

16. Similarly, roll two smaller pieces of brown modelling paste into sausage shapes to form the arms. Flatten one end of each arm to make the hands. Stick the arms to the sides of the monkey and then bend these into position. Bend one of the hands so that it has a slight curve to it.

17. Give your monkey a belly button by using the cone modelling tool to make a small hole in the front of the monkey.

18. To make the head, firstly roll a grape-sized piece of brown modelling paste into a smooth ball.

20. Now you’re going to make the face. Start by rolling out a small piece of skin coloured sugarpaste to roughly 1mm thick. Use a small heart cutter to make a face shape. Roll a small piece of skin coloured sugarpaste into a fat sausage and then flatten this using your fingers. Stick the heart to the front of the monkey’s face, and then stick the flattened sausage over the top of this at the bottom of the face.

22. Give the monkey a cheeky smile by using the scallop modelling tool. Supporting your monkey with one hand, use the other to press the scallop tool into the monkey’s face.

23. Add detail to the ears by rolling two small pieces of skin coloured sugarpaste into balls. Stick these into the indentations of the monkey’s ears.

24. What do monkey’s love? BANANAS. So we’re going to make the monkey a banana! This is really easy to do, just take a small piece of yellow modelling paste and roll this into a sausage shape. Roll one end so that it is slightly smaller than the rest of the sausage, and then curve this slightly. Place the banana in the monkey’s hand, securing into place with a little edible glue.

25. For the finishing touches, you could make a bow tie and party hat for your monkey! To make the bow, use the bow mould and press a piece of red sugarpaste into this. Cut off any excess sugarpaste and then bend the mould to release the bow. It’s a really simple way to make an effective decoration for your cakes and toppers! Stick the bow to the front of the monkey where the neck is.

26. The party hat will be made in the same way as the elephant’s. Start by rolling a small piece of powder blue sugarpaste into a cone shape. Take a smaller piece of yellow modelling paste and roll this into a smooth ball. Use the cone modelling tool to make a ‘fluffy’ effect for the pom pom, and then stick this on top of the hat. Sit the hat on top of the monkey’s head, again using edible glue to keep this in place.

28. Sit the monkey on top of the drum. Here we’ve made a gold and blue drum and a gold and yellow drum.

Our other two circus toppers are sat on gold and red and gold and green drums, so you have a beautiful and colourful collection of toppers! Try the seal & lion circus topper tutorial out for yourself!