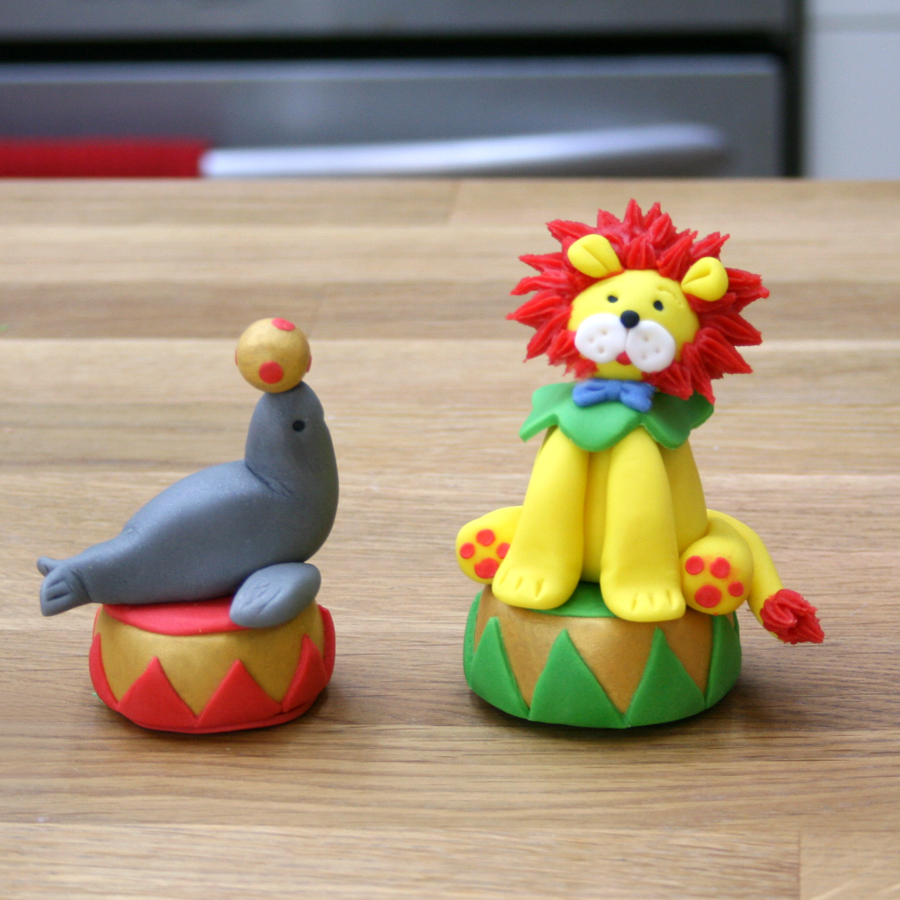 Roll up roll up! We’ve got a special circus tutorial to show you! These adorable little cake toppers are perfect for children’s birthday cakes and will wow and impress your party guests when you say you’ve made them yourself! This tutorial will teach you how to make a sugarpaste lion and sugarpaste seal, sitting proudly on their colourful drums. We’ve also got an additional tutorial to show you how to make a circus elephant & monkey, so you can add tonnes of colour and fun to your birthday and celebration cakes.

1. Make sure you have added gum tragacanth to your grey sugarpaste before you start to make your seal! Once thoroughly kneaded it, start by taking a small piece of sugarpaste and roll this into a smooth ball (approx 1″ in diameter for size).

2. Use your finger to roll one end of the ball so that it becomes elongated. This will make the neck & head of the seal.

3. Roll the opposite end, again using your finger, this time not as long. This will make the flipper tail for your seal.

4. Use a knife to cut into the end of the seal’s tail to form two separate flippers. Use your fingers to gently mould any rough edges to make them more rounded. You can also gently lift the head and neck of your seal so that it is pointing upwards.

5. For the arms (side flippers) of your seal, start by rolling two small balls of grey sugarpaste into elongated cone shapes. Using your finger, flatten the wider end of each flipper slightly.

6. Place the narrow end of each flipper underneath the seal’s belly. You can use a little edible glue if needed to keep these in place. Using a knife or palette knife, lightly mark several lines on each flipper to create a realistic texture.

7. Now you will need to make the ball that will balance on the seal’s nose! Start by taking a small piece of gold modelling paste and knead this thoroughly. Roll the modelling paste into a smooth round ball. Use the size of your seal as a guide for how big this needs to be.

8. Add detail to the ball by rolling tiny pieces of red sugarpaste into balls. Use the ball modelling tool to flatten and stick these to the gold ball.

9. Balance the ball on the end of the seal’s nose. You may need to gently flatten the tip of the seal’s nose first to make sure it doesn’t roll off! You can then secure this into place using edible glue (or a little royal icing, if you prefer!)

10. To make the eyes, simply take the cone modelling tool and make two holes in the sides of the seal’s head. Roll two tiny pieces of black sugarpaste into balls and stick these into the holes.

11. For the mouth, take the scallop modelling tool and press this into the seal’s head to make a smiley mouth. You will need to support the seal as you do this as the sugarpaste will still be soft.

12. Leave the seal to dry overnight. You may also need to prop the front of the seal against a flat edge to make sure that as it dries, the head stays stood upright.

14. Using the cake smoother, flatten the ball slightly to make the top and bottom of the drum smooth & flat.

15. Use the cake smoothers to press & mould the sides of the drum so that they become smooth and rounded. If you only have one cake smoother, use your free hand to help mould the drum into shape.

16. To make the triangle pattern on the drum, firstly roll out a piece of red sugarpaste to approximately 1mm thick and cut this into a perfect square, roughly 1.5″ x 1.5″ in size.

18. Cut each square into three triangle shapes, one large one in the centre and two smaller ones either side. Disregard the smaller triangles and save the larger ones for your drum.

19. Stick each triangle along the sides of the drum, using a little edible glue to keep them in place if needed.

20. Finally, using the medium PME round cutter, cut out two circle shapes from the red sugarpaste (roughly 2mm thick) and place these on the top and bottom of each drum.

21. To make the lion, start by taking a piece of yellow modelling paste and roll this into a smooth ball. This should be smaller than a golf ball in size, but larger than a grape.

22. Use your hands to mould the modelling paste into a cone shape with a flat top.

23. Take two smaller pieces of yellow modelling paste to make the lion’s arms. Roll these into long cone shapes and flatten the wider ends with your hands.

24. Stick the legs to the front of the lion’s body using a little edible glue. Gently bend the ends of each leg to make the paws stick out slightly.

25. Make two slightly smaller cone shapes and stick these to the sides and around the back of the lion’s body to form the legs.

27. Next, place a cocktail stick through the body of the lion, leaving a small part of it sticking out at the top. Roll out a piece of green sugarpaste to roughly 2mm thick and use the medium PME flower cutter to make a ‘frilly’ collar. Place this on top of the lion’s body, ensuring that the cocktail stick goes through the centre of the flower.

28. To make the head, roll another piece of yellow modelling paste (a little bigger than a grape) into a smooth round ball. Dab a little edible glue around the cocktail stick and then place the head on top of the body.

29. For the face, take two small pieces of white sugarpaste and roll these into balls. Flatten these using the wide end of the ball modelling tool to form two small circles. Stick these next to each other on the front of the lion’s face to make the muzzle. Roll a tiny piece of black sugarpaste and roll this into a ball to make the nose. Similarly, roll a tiny piece of red sugarpaste into a ball to make a mouth. Stick the nose and the mouth to the front of the lion’s face, directly above and below the muzzle respectively.

30. Using the cone modelling tool, make several small holes in the muzzle where the whiskers would be, and two holes in the front of the head for the eyes. Roll two small pieces of black sugarpaste into balls (as you did for the seal) and stick these into the holes to complete the eyes.

31. Use the cone modelling tool to make two curved eyebrows above each eye.

32. Give the lion a wild and bushy mane using Wilton red decorating icing, a standard coupler and a large star piping tip. Attach the piping tip to the icing tube using the coupler, and then carefully pipe small blobs of icing along the hairline of the lion. Start at the front and then build up the mane by piping more and more blobs of icing all over the head.

33. Your lion is starting to look like… well, a lion! But there’s something missing. His ears! To make the ears, roll two small pieces of yellow modelling paste into round balls, and then pinch the ends of each one slightly to make them pointed. Indent each ear using the blade modelling tool and then place the ears on top of the head, using the icing (or hair) to hold them in place.

34. You now just need to add the finishing touches to your lion! To make the feet of the legs more defined, roll 8 small pieces of red sugarpaste into balls and flatten these against each foot using the ball modelling tool, to form the paws.

35. For the tail, roll a piece of yellow modelling paste into a long pointed sausage shape and stick this to the back of the lion, curling the tail around the legs. Use a small amount of edible glue to keep this in place.

36. Take the red piping tube and pipe several blobs of ‘hair’ onto the end of the tail and leave this to dry.

38. Stick the bow to the neck of the lion using a little edible glue. You can now make another drum for your lion to sit on and use edible glue to keep the lion in place. Leave your toppers to dry overnight and then add them to your cake!

Now that you’ve made your circus seal & lion, why not try our elephant & monkey tutorial to complete the circus crew!?