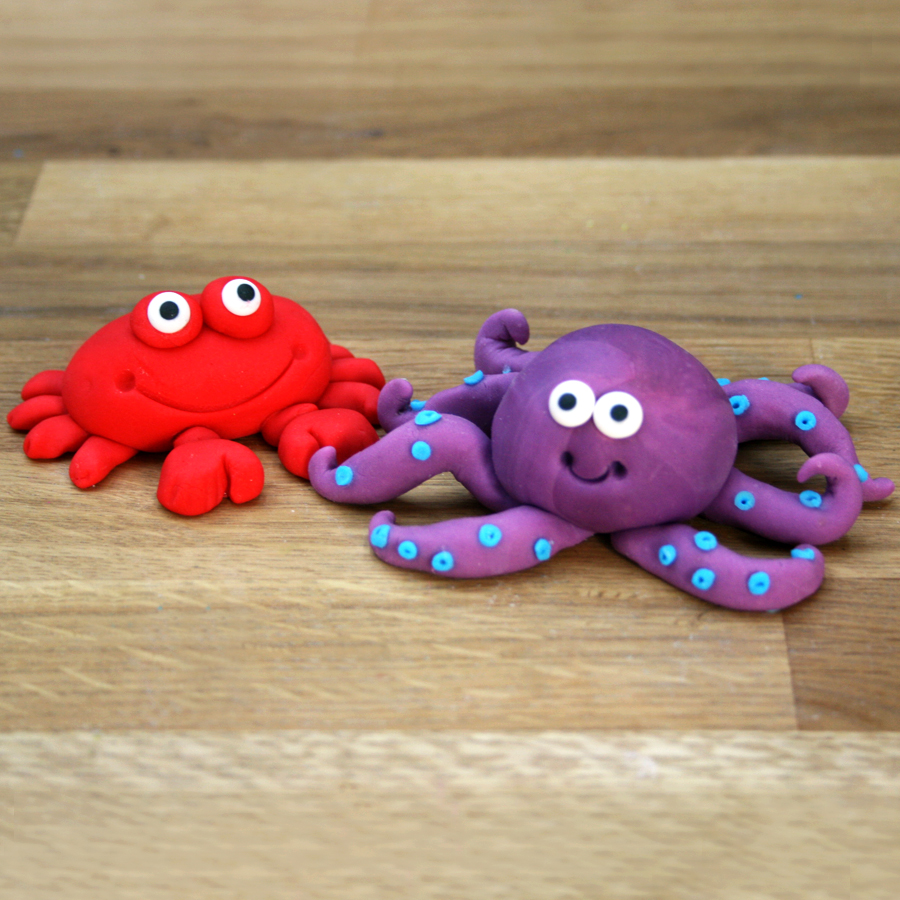 Create these cheeky crab and octopus characters to use as cake toppers on an under the sea themed cake! Perfect for children’s birthday parties as they are so bright and colourful. The toppers are made entirely out of sugarpaste and will add instant decoration to your celebration cakes. Once you’ve made the crab and octopus toppers, why not try out our starfish and clownfish tutorial, or add even more detail to your cakes and cupcakes to really bring them to life with our seaweed and shells and coral and sponges tutorials?

Step By Step By Instructions

You will need to knead some gum tragacanth into your sugarpaste before you begin to model the character cake toppers. This will ensure the sugarpaste sets hard so that the toppers retain their shape. Store any sugarpaste in an air-tight container when not in use.

1. Take 8 small pieces of purple sugarpaste and roll them into sausage shapes approximately 5cm long. Arrange them so that 4 of the sausages lay opposite the remaining 4. These will form the octopus’ legs.

2. Next we will create the body. Take a chunk of purple sugarpaste approximately the size of a golf ball and roll it into a smooth ball. Sit the ball on top of the legs. You’ll already start to see your octopus coming together!

3. Take a small piece of blue sugarpaste and roll it out to approximately 1mm thick. Using the narrow end of the small round piping tip, cut out lots of small circles. The circles will be used as suckers on the octopus’ legs.

4. To make the suckers stick to the legs, use edible glue and carefully place them into position.

5. Next, take your serrated and tapered cone tool and gently indent each of the blue circles to make the suckers appear more realistic.

6. You also want to give the octopus a face to give it a characterised look. Take a pair of edible eyes and using edible glue, stick them to the octopus’ head.

7. You can create a smiley face by taking the curved end of your scallop tool and firmly pressing it into the octopus head. Be careful not to pierce too far through the sugarpaste.

8. Finally, take a small piece of kitchen roll and twist it. Place the kitchen roll under several of the octopus’ legs to help them stay in a curved position as they dry.

11. Take a small piece of sugarpaste and roll this into a ball. Split into two equal pieces to form two smaller balls. Using edible glue, stick the two balls onto the face of the crab where you want the eyes to be.

12. Next, take the edible eyes and stick them on to the red balls.

13. To create the claws of the crab, take 2 small pieces of sugarpaste and roll them into balls. Flatten the balls with your fingers, and using the blade tool create a small slit in the sugarpaste.

14. Take another piece of sugarpaste and roll it into a small sausage, approximately 2cm long. Cut this in half to form the arms of the crab, and attach them to the front of the body. Attach the claws to the arms using edible glue.

15. Finally, finish off the crab’s face by giving it a cheeky mouth. Using the metal petal cutter, press the bottom half firmly into the sugarpaste to give the crab a smile. You can add dimples to the crab’s smile by using the small end of the ball modelling tool.